Young People Tell Us How They Are Fighting Poverty & Driving Sustainability 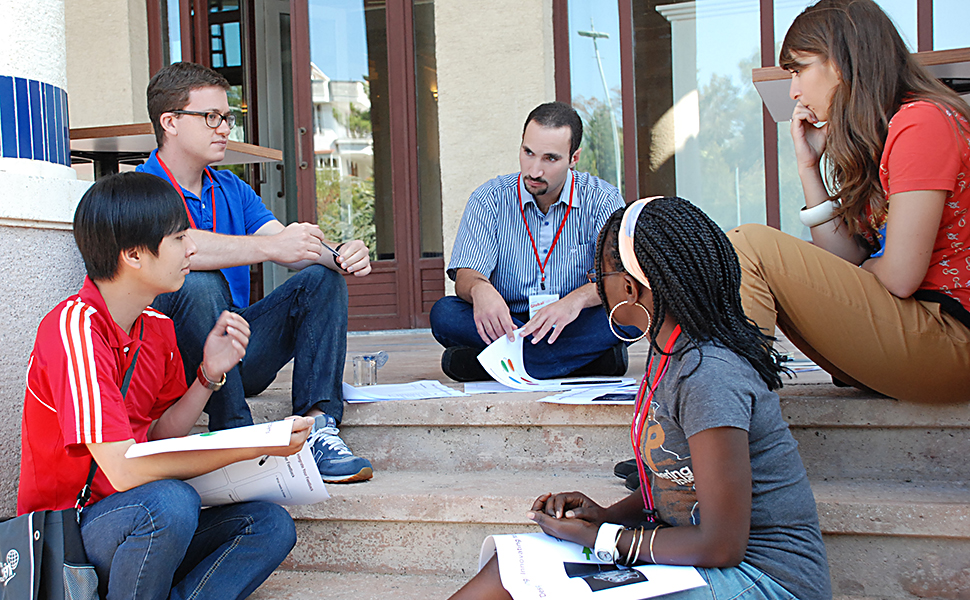 Smart, passionate young people are hungry to continue creating meaningful and lasting change for their families, their communities, and the world. For International Youth Day, we set out to hear directly from young people around the globe and share their take on this year's theme, centered on two of the Sustainable Development Goals (SDGs). The thoughtful responses from a dozen youth who've participated in our initiatives underscore what IYF has known for 26 years: young people are the world's greatest resource. To reach the SDGs, the world must engage them as the agents of change they already are—entrepreneurs, peer educators, job creators, and community leaders—and support them in realizing their full potential.

This year, International Youth Day focuses on poverty eradication (Goal 1) and sustainable consumption and production (Goal 12). For our informal survey, we asked a sampling of young people these questions:

Responses from Latin America focused on skill-building so that young people can secure employment and provide for themselves and their families. "If all young people can access work, we can help eradicate poverty," says Rafael, 19. Living in Argentina, he is a participant in the Walmart Social Retail Training initiative, a NEO-associated project carried out in partnership with the Walmart Foundation.

Many other young people answered the first question by emphasizing the importance of creating opportunities through entrepreneurship. "We are creating productive initiatives in business, education, and training," says Nat, a 20-year old participant in the TK Foundation-funded Orale initiative in Mexico.

Young entrepreneurs like Rudo, 31, in Zimbabwe take the thought one step further, because she is now in a position of being a job creator. "My current business grew from self-owned to a partnership," says the Zimbabwe:Works (Z:W) participant. "As a chemist, l want to see myself establishing industries that can employ other young people. Currently l’m employing seven casual workers a day. If funds were available and the project running at full capacity, l could employ more than 30 casual people and five full-time employees." Z:W is supported by the UK’s Department for International Development (DFID), the US Agency for International Development (USAID), and the Embassy of Sweden, in partnership with Zimbabwe’s Ministry of Small and Medium Enterprise and Cooperative Development.

Self-employment also offers young people opportunities to effect positive change within their communities. In Jordan, 24-year-old social entrepreneur Mariam says, "I was from a household that made no income. I started very small, and now my project, Ibda’a, trains women from my community and disabled people, helping them generate income independently." Mariam is a 2012 Fellow of BADIR, a YouthActionNet® national partner and an initiative of IYF, Starbucks, and M.H. Alshaya, Co.

Encouraging this kind of entrepreneurship requires faith in young people's inherent capabilities, says Nedjma in Algeria. This 25-year-old was a participant in the IDMAJ initiative, completed in cooperation with the US Embassy in Algiers and USAID. "We need to help youth know their internal ability—giving them trust by showing them how to use their circumstances, environment, and obstacles in a positive way," Nedjma says. "For example, creating projects like cultivating the gambouzia fish that promotes health by eating mosquitos that can spread malaria."

Across continents, in Kazakhstan, 15-year-old Daniyar is participating in Zangar, an initiative focusing on STEM and Passport to Success® life skills that is being carried out in partnership with Chevron. Daniyar says, "Things like knowledge and skills are much more important than physical objects, like a school building. There must be many well-trained cohorts of trainers that will help other people find their best abilities."

2012 Laureate Global Fellow Tolulope, 30, of Nigeria shared a similar thought. "Young people can help reduce and end poverty by first loving their neighbors as themselves, including the development of individual's finding and fulfilling purpose," she says. "Young people can do this via peer-to-peer educational support."

"Poverty ends when we are well aware of our needs as a nation, when youth have real knowledge about the problems facing our country and the roots to the problems and a vision of what needs to be done," says Ghassan, 29, a 2015 BADIR fellow in Jordan.

For our questions about sustainability and "thinking green," many young people offered current examples. Several responses across regions emphasized a need to recycle. "It’s simple and doable by everyone. Instead of throwing things away, we are able to produce beautiful things," says BADIR fellow Mariam.

Also mentioned as meaningful were organized community events for activities like trash collection and tree planting. "Clean up campaigns are very common with the youth and should be promoted," says Tinasche, 25, a participant in Zimbabwe:Works. "Personally, every year I participate in at least two." Ramiro, 21 and a participant in EquipYouth Mexico, echoed the sentiment, saying that young people need to set an example by picking up litter. EquipYouth in Latin America is a NEO-associated employability initiative.

In Palestine, two participants in the Youth Entrepreneurship Development initiative, funded by USAID West Bank and Gaza, spoke to the importance of green building. Mona, a 24-year-old architect says, it "guides me to think all the time of saving resources and being creative in finding new ideas that can make a difference in my society." Daniel, 23, elaborates on the idea with an example, saying, "Since we are suffering from water scarcity in Palestine, we encourage people to take into consideration while planning for new buildings the need to dig wells to gather and benefit from the rain in the winter."

Young entrepreneurs in Zimbabwe also spoke to the ways their businesses support sustainable consumption and production. "At my [catering] business we do not encourage selling food in disposable containers," says Dudzai, 29, a Zimbabwe:Works participant. "Rather, people are encouraged to sit down and have their meals on plates. In terms of waste disposal, we separate based on whether or not something can be composted, and we use a pit for composting."

Rudo, the chemist and small business owner, says, "Instead of oil being released to rivers or other waste disposal mechanisms, we are putting it to good use by recycling it in the production of soap."

Young people are incorporating environmental sustainability into their daily lives, their business plans, and their long-term way of seeing and interacting with the world. They're also thinking creatively and practically about their role in ending poverty. If the world is to meet the ambitious Sustainable Development Goals, we must engage these youth as drivers of change.