For many people today, a family is still strictly defined as two parents and their children. But the six youth from an orphanage in Kabul, Afghanistan, whom I met last week at IYF's offices in Baltimore, Maryland, have a far more inclusive definition of family. And while they have experienced great loss and pain in their lives, their bright spirits and determination to be a positive force in their war-torn country make it clear that the people in their lives are doing something right.

Eraj, Mohsin, Shogofa, Hala, Lida, and Maria, ranging in ages from 12 to 17, are riding in their “Freedom” bus across the United States with Ian Pounds, their American teacher who lives and works in Afghanistan. Their goal: to raise awareness about their country—and support for their orphanage. Last week, our young visitors wore traditional Afghan clothes, with sequins sewn into their dresses, caps and shawls. They seemed very much at home, enjoying the Afghan food we ordered in their honor, and singing a few songs for our staff and invited guests. But their stories depict the almost unimaginable horrors they have faced during their short lives. 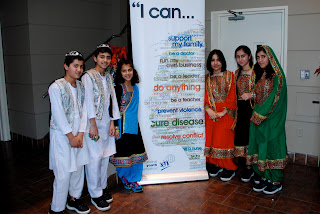 It was Maria, age 17, who hushed the room with her story. Her family had been struggling to survive under the harsh regime of the Taliban, beginning in the 1980s. Growing up, she said, “We had no food, no water, no wood, and they came and took my father and uncle away to prison.” Her uncle was severely tortured, and her mother was forced to beg on the streets to feed her six children. Maria began attending school, but because she had no shoes or uniform, she became the target of jokes from her fellow classmates. She saw scenes of violence and brutality in her community that no one, particularly a child, should ever experience. When her mother heard about a new orphanage that was opening, she decided, out of desperation, to enroll three of her daughters, including Maria. “It was then,” said Maria, “that I learned how to change my life for the better; I said goodbye to the old Maria, and welcomed the new Maria.” Much of Maria’s transformation was made possible by her extended family—her teachers, the orphanage secretary, the bus drivers, her neighbors.

One member of Maria’s new family is 27-year-old Andeisha Farid, the young Afghan woman who founded the Afghan Child Education and Care Organization (AFCECO) — which runs eleven orphanages (including Maria’s) across Afghanistan and Pakistan. Recognizing that traditional orphanages often left children feeling isolated from society, Andeisha provides a nurturing home and an inclusive support system where youth can build ties with their community and extended families. In some cases, children like Maria and her siblings have a parent who still keeps in touch. “Here,”says Andeisha, “children begin a new life based on peace, love, and respect,” something they’ve had very little of in their lives.

For her courageous and innovative work, Andeisha was selected by IYF as a YouthActionNet® Fellow in 2011. Her mission: to ensure that more of the 1.6 million orphans growing up in Afghanistan today are attending school, receiving support to pursue a university education, and learning to be leaders. What I realized last week is that thanks to Andeisha and many others, these young Afghans are finding more than a new sense of belonging as members of a broad and loving community. They are also redefining our notion of what’s possible in a war-weary and divided country like Afghanistan—when the younger generation has the encouragement and the resources to build a more peaceful and inclusive society.