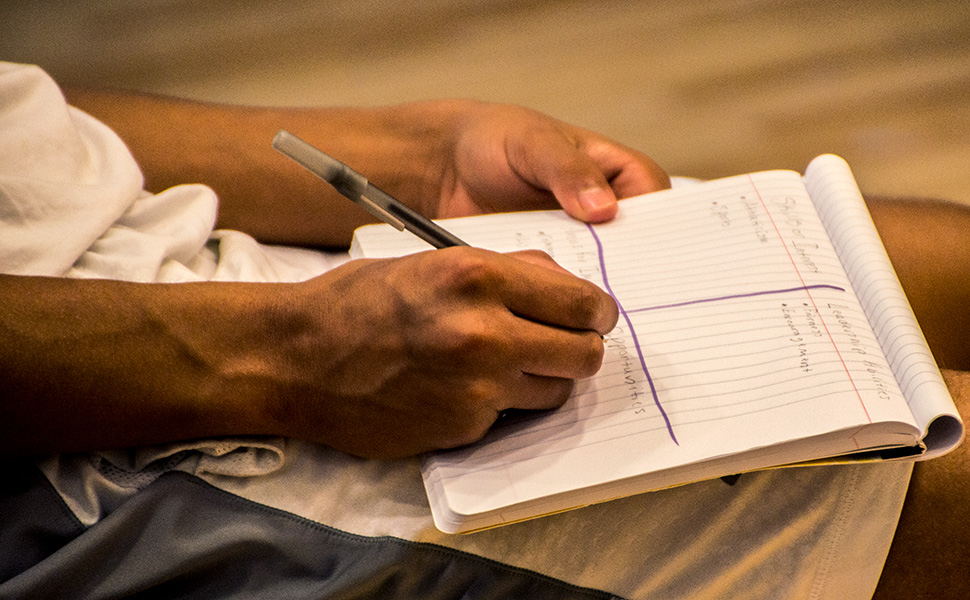 On a stifling hot morning, a group of ten 14- and 15-year-olds huddled around a cluster of desks at Harlem Park Middle School in West Baltimore. They weren’t here for summer school—these young people were selected to participate in YouthWorks, a widely popular opportunity among local teens looking for jobs from June to August. This year, a record 9,400 youth applied to participate.

Placed at Baltimore City schools, the youngest YouthWorks participants earned an hourly wage as they maintained a clean campus and helped school administrators with special projects. This year, instead of getting straight to work each morning, youth spent a few hours learning and practicing life skills with a small group of peers. They trained using Passport to Success® (PTS), the IYF curriculum that has prepared more than 100,000 young people in over 40 countries for productive employment. This new connection to Baltimore youth comes as the result of a partnership with the Mayor’s Office for Employment Development and the Family League.

I had the opportunity to join a PTS session, where I was able to experience firsthand the curriculum and young people in action. In just one morning, I saw moments of breakthrough and moments of struggle. Most importantly, I saw youth begin to expand their possibilities:

1. They overcame the challenges of trying something new.

I watched young people overcome doubt and stretch beyond their comfort zones as they debated how to handle tough situations that might arise in their school or community. I saw them test boundaries and evaluate the value and meaning of the activities they participated in. Many brought preconceived notions of traditional school environments, and it was exciting to see them realize that learning isn’t always science and math or sitting still. It can be heated discussions and working in small teams to discuss real-life issues.

2. They practiced self-reflection and self-expression.

Young people who may have been accustomed to sitting at the back of a classroom were now sitting in chairs set-up in a “talking circle,” being called on to think critically and participate actively. The topic of the day, respect, required participants to reflect on what they would do in a variety of situations. For example, what if the elderly woman in your neighborhood who is always mean to you and your friends is struggling with bringing groceries into her house?

For some youth, expressing themselves came easily, but they needed encouragement to reflect a bit longer on how to integrate the life skills that they were learning before speaking. For others, it was a new experience expressing their viewpoints publically—especially if their ideas were different from their peers’.

3. They learned how to work in a team.

Working in group and pairs, young people from diverse backgrounds—private schools, charter schools, and schools in some of the toughest areas of the city—found commonalities through experiences with parents, friends, siblings, and school.

While there were moments of tension, there were also moments of encouragement. When one student hesitated to give the teacher her answer, her peers waited patiently and provided her the space she needed. When another student gave a fantastic response for a different question, clapping and praise erupted throughout the group. I was later told by trainers and site leaders that these moments of respect, patience, and encouragement also trickled over into the work activities the youth performed in teams at their assigned schools.

My favorite moment of the day came when the trainer asked the group to write down the three moments of their life when they felt proudest. After five minutes of writing, mixed with a bit of squirming and students sneaking peaks at one another’s papers, the teacher asked for a volunteer to share what he or she had written. A soft-spoken young man stood up, and with his eyes on his notebook, read aloud:

“My proudest moments were when my baby sister was born, when my family finally moved into a new house, and when I got the letter that said I was selected for YouthWorks.”

After the session, I asked the young man about why his selection brought him so much pride. He explained that his grandmother had always emphasized the importance of education and working hard. When he was chosen to participate in YouthWorks, he took the opportunity seriously, and wanted to make his grandmother proud.

Our chat ends as it’s time for him to head off with his team to move desks and chairs in the classrooms downstairs. Next year, he will be eligible for a YouthWorks placement at a local business, non-profit or government agency, and the life skills he’s learning this summer will help him stand out among his peers. After graduation, if he pursues a career with the same determination and learning-readiness that he’s brought to YouthWorks, the possibilities will be many.